The “new normal” is a term that has been used to describe the post-2008 financial crisis era, in part because economic policies that were uncommon, such as zero interest rate policy and quantitative easing, suddenly became commonplace. The goal of these policies was to provide ample liquidity to the marketplace by lowering interest rates to facilitate growth in the overall economy. As the thinking goes, if a company can borrow money cheap enough, it could increase its spending on capital projects to grow its core business and in-turn stimulate economic growth. However, the availability of cheap capital does not guarantee that the money will be put towards capital projects, and cheap capital also makes another type of investment more attractive to companies – their stock!

Over the past decade, US corporations have been on a stock buyback frenzy in part financed with “buyback debt” – debt issued by companies for the sole purpose of buying back their stock. This buyback debt has increasingly been incorporated in the ICE BofAML US Corporate Index (“US corporate bond index”). In total over the past decade approximately USD$299 billion of buyback debt was issued and included in the US corporate bond index, with over half of the issuance ($156 billion) rated BBB (Chart 1).

The effect of this issuance on the overall index has been profound. Buyback debt issuance went from representing only 2.7% of the US corporate bond index in 2010 to 37.9% in 2019, with the majority of the outstanding issuance in 2019 (19.3%) being rated BBB (Chart 2).

Buyback debt issuance has also had a knock-on effect to the overall credit quality of the US corporate bond index, which has deteriorated over the past decade. The BBB rated composition of the index went from representing 35% of the index in 2010 to 50% in 2019 (Chart 3). 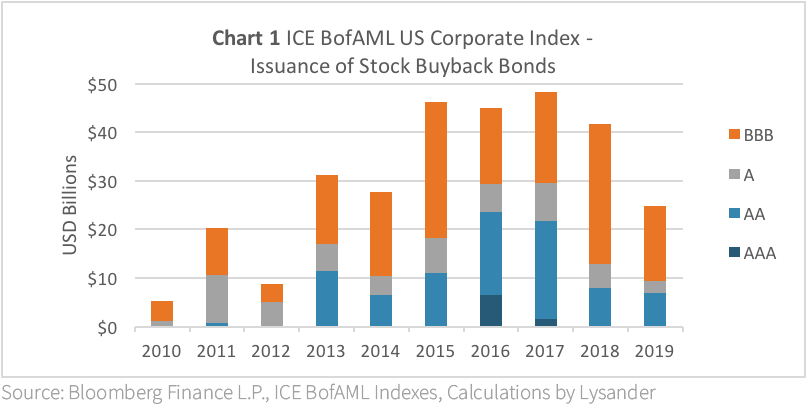 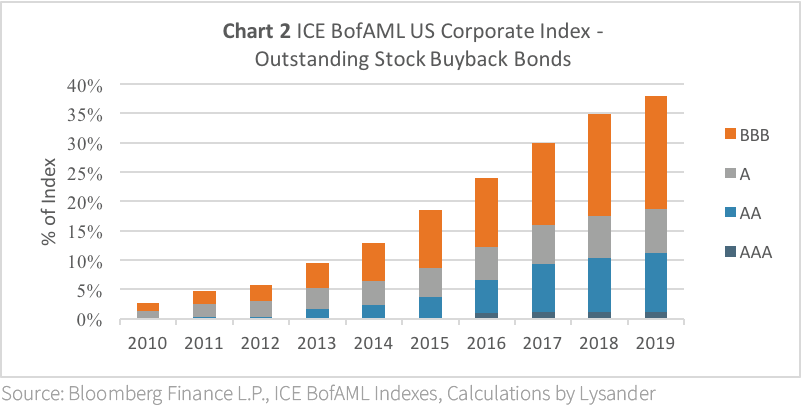 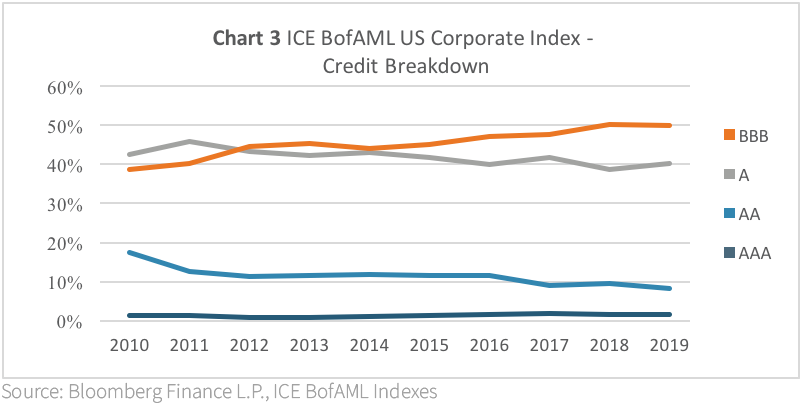 Under the Hood of Stock Buybacks

Stock buybacks are a tool used to return cash to shareholders that companies can’t reasonably reinvest back into their businesses and are typically financed with the free cash flow generated from their operating businesses. When stock buybacks are financed from issuing debt, it can be problematic because it does not support the growth of the operating business, and the added debt burden has to be serviced through regular interest payments and the original principal must be repaid either from a later debt financing or from accumulated free cash flow.

As investors tend to focus on earnings per share as a gauge of a company’s earnings growth rather than net income on the income statement, it incentivises companies to pursue stock buybacks to increase earnings per share because it generally supports a higher stock price. Essentially, issuing buyback debt can be viewed as potentially sacrificing the long-term health of a business to benefit shareholders in the short-term.

To help illustrate the potential risk of buyback debt in the US corporate bond index, refer to Chart 4 and Chart 5 which shows the weighted average net debt to EBITDA and weighted average EBIT to Interest Expense of the top 10 BBB rated issuers in the US corporate bond index, respectively.1 The key takeaways are over the past decade, the amount of corporate debt relative to profitability has increased (Chart 4), and the level of profitability relative to the level of interest payments to service the debt has decreased (Chart 5). Both trends suggest a general decline in financial health. 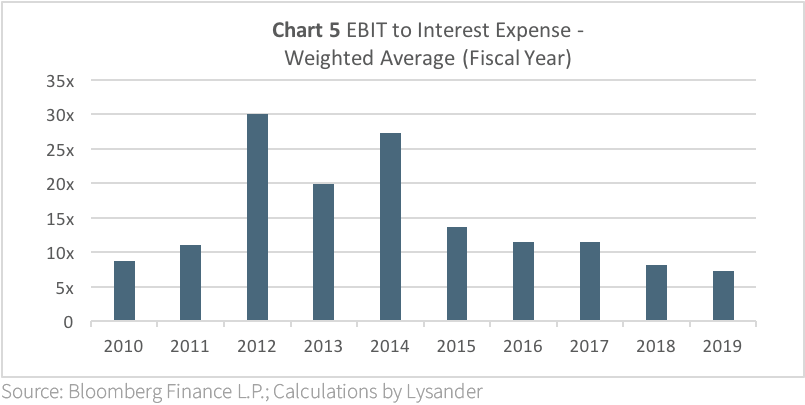 Furthermore, to illustrate the incentive that companies have to pursue stock buybacks, refer to Chart 6 and Chart 7 which shows the weighted average net income and the weighted average trailing 12-month earnings per share of the top 10 BBB rated issuers in the US corporate bond index, respectively. The key takeaways here are that over the past decade while net income increased by 2.6x, earnings per share increased by 7x – the power of stock buybacks in action! 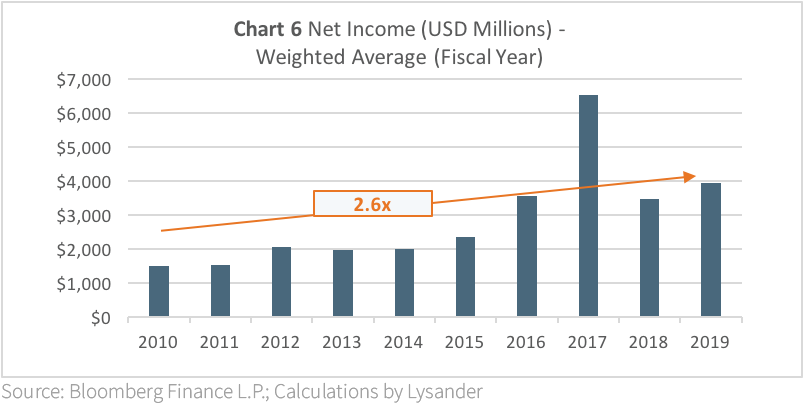 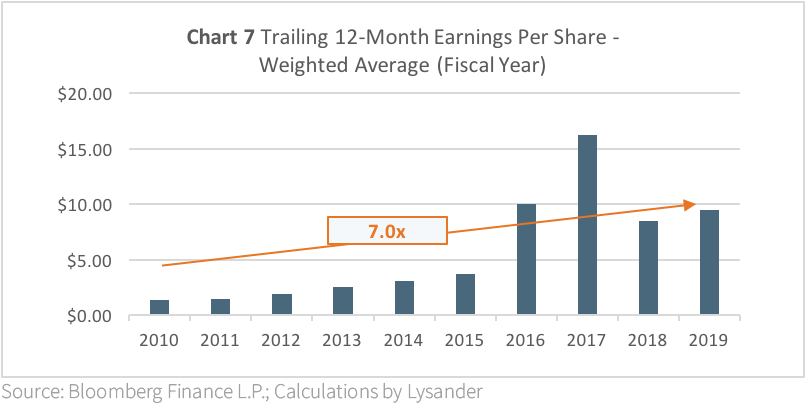 This document has been prepared by Lysander Funds Limited (“Lysander”) solely for information purposes. Information in this document has been derived or obtained from sources believed to be trustworthy and/or reliable. Lysander does not assume responsibility for the accuracy, currency, reliability or correctness of any such information. Nothing in this document should be considered a recommendation to buy, sell or short a particular security. Information in this presentation is not intended to constitute legal, tax, securities or investment advice and is made available on an “as is” basis.

The source of all ICE BofAML Indices is ICE BofAML Indexes. Any unauthorized use or disclosure is prohibited. Nothing herein should in any way be deemed to alter the legal rights and obligations contained in agreements between any ICE Data Services entity (“ICE”) and their clients relating to any of the Indices or products or services described herein. The information provided by ICE and contained herein is subject to change without notice and does not constitute any form of representation or undertaking. ICE and its affiliates make no warranties whatsoever either express or implied as to merchantability fitness for a particular purpose or any other matter in connection with the information provided. Without limiting the foregoing ICE and its affiliates makes no representation or warranty that any information provided hereunder are complete or free from errors omissions or defects. All information provided by ICE is owned by or licensed to ICE. ICE retains exclusive ownership of the ICE Indices including the ICE BofAML Indexes and the analytics used to create this analysis ICE may in its absolute discretion and without prior notice revise or terminate the ICE information Indices and analytics at any time. The information in this analysis is for internal use only and redistribution of this information to third parties is expressly prohibited.

Neither the analysis nor the information contained therein constitutes investment advice or an offer or an invitation to make an offer to buy or sell any securities or any options, futures or other derivatives related to such securities. The information and calculations contained in this analysis have been obtained from a variety of sources including those other than ICE and ICE does not guarantee their accuracy. Prior to relying on any ICE information and/or the execution of a security trade based upon such ICE information you are advised to consult with your broker or other financial representative to verify pricing information. There is no assurance that hypothetical results will be equal to actual performance under any market conditions. THE ICE INFORMATION IS PROVIDED TO THE USERS “AS IS.” NEITHER ICE NOR ITS AFFILIATES NOR ANY THIRD PARTY DATA PROVIDER WILL BE LIABLE TO ANY USER OR ANYONE ELSE FOR ANY INTERRUPTION INACCURACY ERROR OR OMISSION REGARDLESS OF CAUSE IN THE ICE INFORMATION OR FOR ANY DAMAGES RESULTING THEREFROM. In no event shall ICE or any of its affiliates employees officers directors or agents of any such persons have any liability to any person or entity relating to or arising out of this information analysis or the indices contained herein.