There are growing concerns the Bank of Canada is falling behind in achieving its stated mandate of “using its monetary policy framework to keep inflation low and stable”1.

As illustrated in Chart 1, in December 2021 year-over-year Canadian CPI inflation hit 4.8%, the highest reading since 1991, which is ironic because it was in 1991 when the Bank of Canada introduced a 2% inflation target to reduce the overall level of inflation in the economy.

This would likely be concerning for those who remember inflation in the 1970s and 1980s. Year-over-year inflation in Canada during those decades peaked at levels over 12%, and the Canada 10-year bond yield peaked at a level over 16% in 1982. The fallout from this was severe, as Canadian GDP contracted for six consecutive quarters ending in Q1 1983. 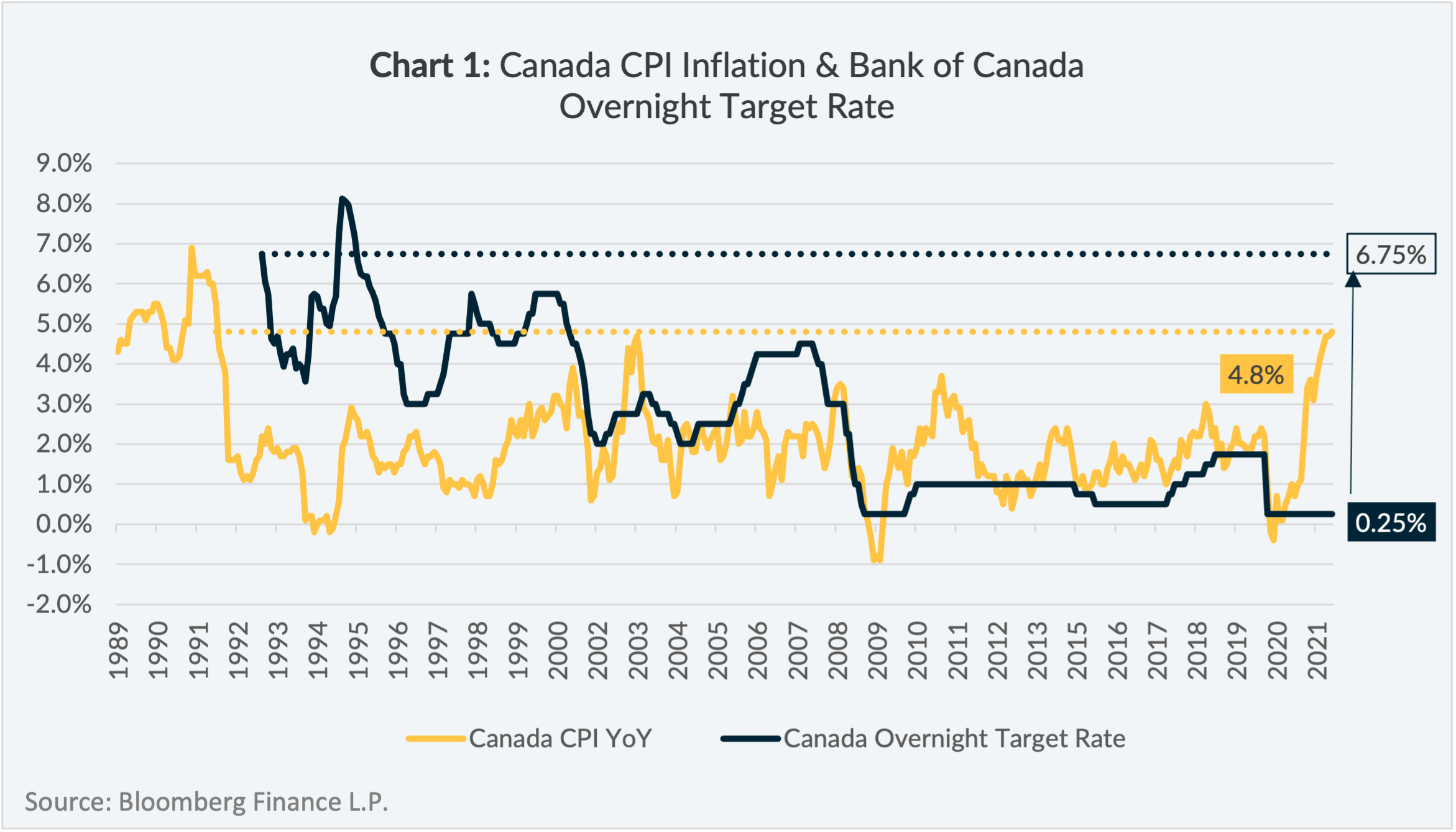 Judging by the recent movement of the Canadian yield curve it would appear the bond market is also growing cautious of inflation. On August 4, 2020, many Canadian bonds across the yield curve hit their all-time low yield levels, and as illustrated in Chart 2, by January 31, 2022, their yields had all increased by at least 1.17%. This corresponded with price declines ranging between -3.9% and -24.1%, for tenors between 3-years and 30-years – unfitting returns for securities know as “risk-free”.

The recent volatility in Government of Canada bonds highlights a fundamental bond market risk that has acted as more of a reward for bond investors over the past four decades – duration. 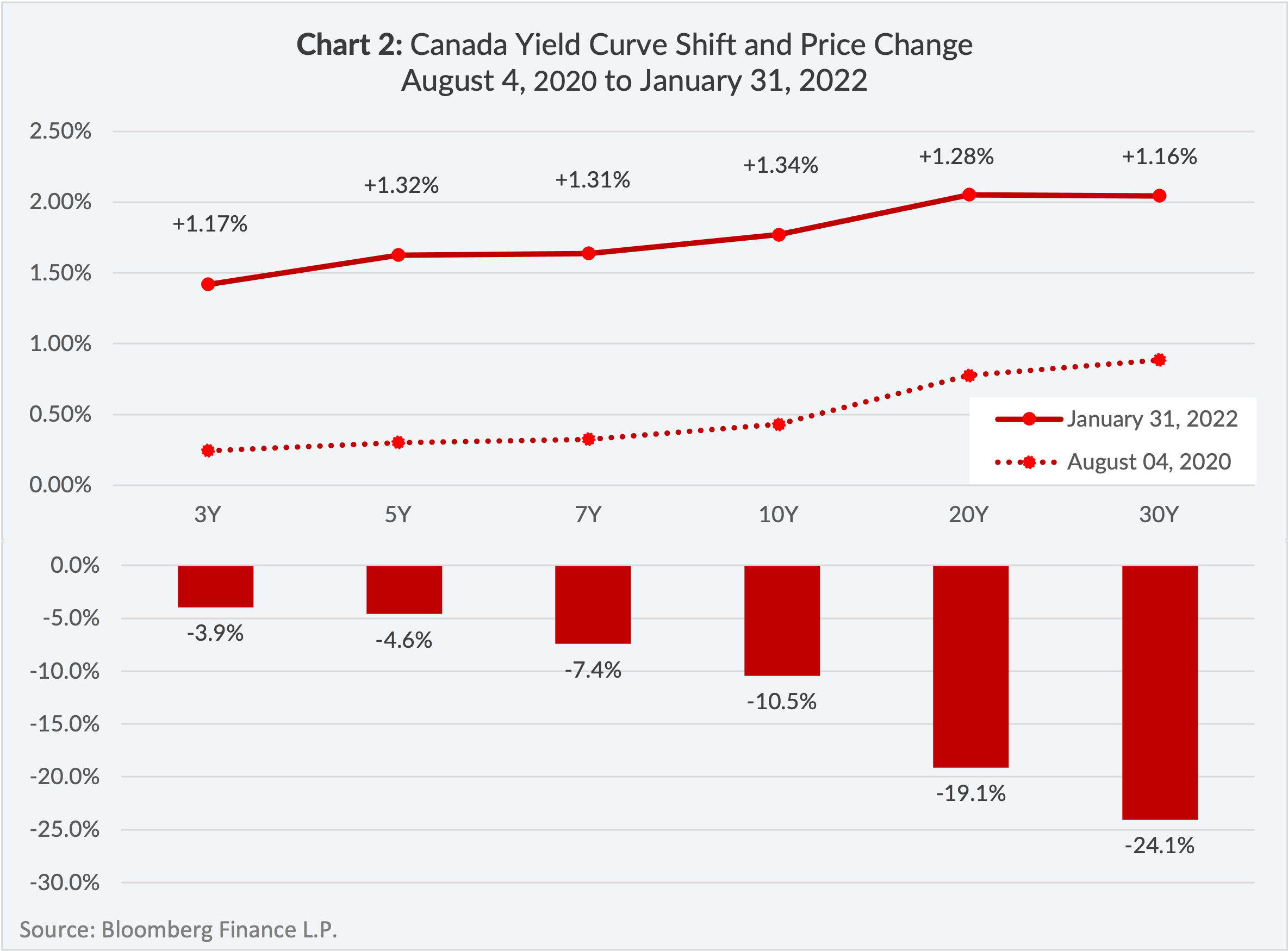 The great thing about bonds is they are fundamentally simple securities to understand, because investors know in advance what rate of return they will receive by holding a bond until maturity, its yield-to-maturity (“yield”). Duration quantifies the expected percentage change in price of a bond given a 1% move in interest rates, up or down2.

Put differently, a bond’s yield is the annual return and investor can expect by holding it to maturity (i.e. its reward). While duration is the extent to which a bond’s return will deviate from its initial yield prior to its maturity, based on changes in interest rates (i.e. its risk).

Many investors have relied on passive broad market bond indices such as the ICE BofAML Canada Broad Market Index3 (“Canadian bond market” or “the Index”) to gain exposure to bonds. For many years, this strategy has worked. However, today, against the backdrop of high inflation and possibly higher interest rates, the outlook for the Canadian bond market is less attractive. 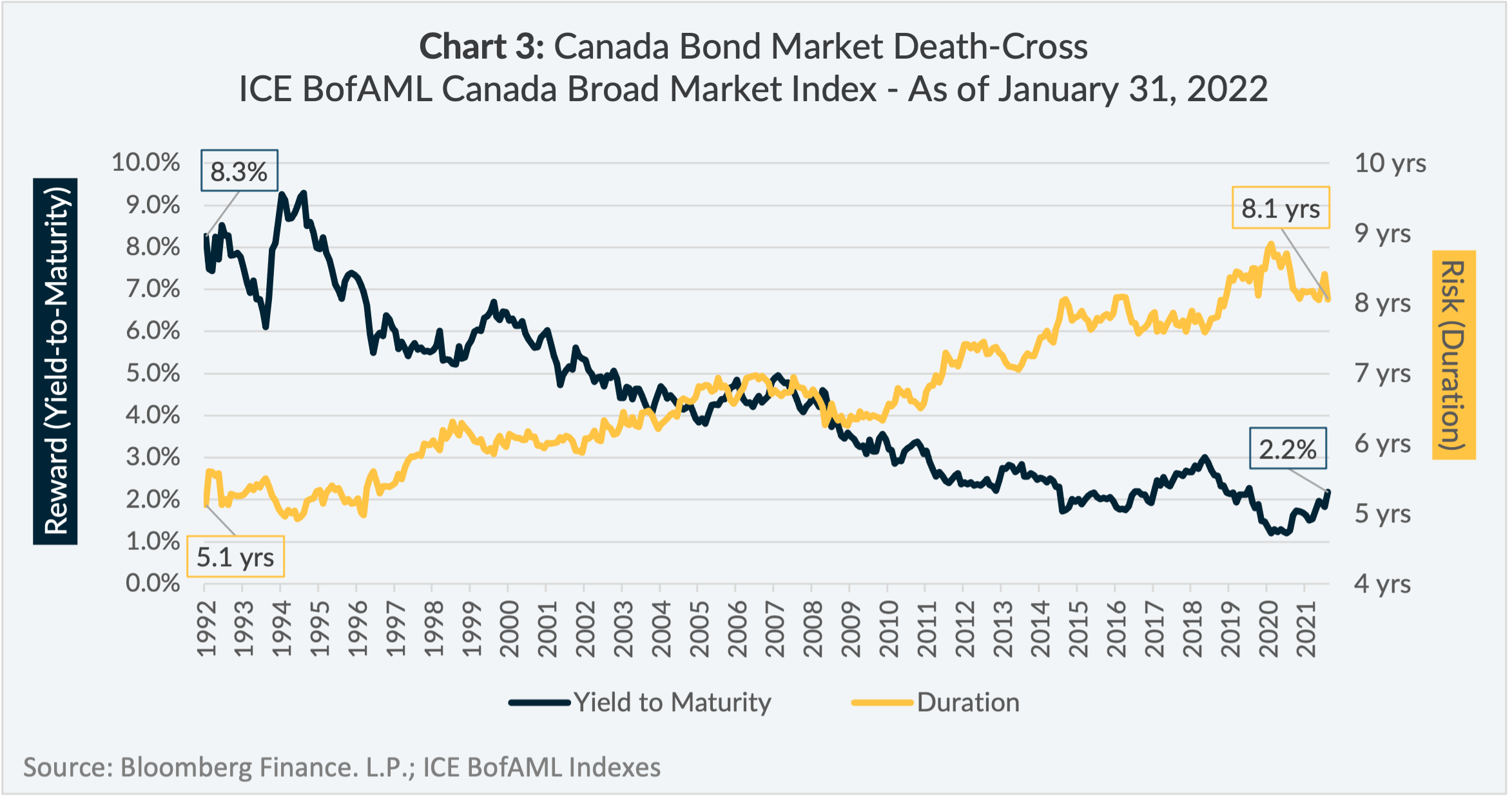 The gradual decline of interest rates has been a double edge sword for investors in the Canadian bond market over the years. On one hand, it has enhanced total returns above what would have been expected based on the initial indicated yield. On the other hand, it has gradually exposed investors to a greater risk of capital loss in a period of rising interest rates.

As the saying goes, “when the tide goes out, you can see who was swimming naked”. Well, the tide of duration started moving out in 2020 and the trend has continued into 2022.

This may only be the beginning of this trend. Inflation continues to be stimulated by an unprecedented combination of demand (i.e. monetary and fiscal stimulus) and supply factors (i.e. broken supply chains). Furthermore, if inflation in the Canadian economy remains persistent it could start to creep into broad based wage adjustments, which could cause inflation to spiral even higher. In this scenario, Canadian interest rates would likely move higher and at a likely significant cost for bond investors in passive broad market bond indices.

A solution for bond investors in the current environment is to structure their bond portfolios to have yields that are greater than or more closely aligned to their durations. This may not be easily achievable through passive broad market bond indices, but could be done through actively managed bond solutions.
Finding the right bond strategy depends on the unique risk and return requirements of the individual investor, which could be aided in consultation with a financial advisor. A good starting point is to assess the total risk of a bond portfolio by understanding both its duration and average credit quality. A higher level of risk is not necessarily a bad thing, so long as investors are adequately compensated for assuming it, and it falls within the boundaries of their return and risk objectives.

Lysander Funds offers a variety of bond mutual funds to meet the needs of investors with different return and risk requirements. As of January 31, 2022, each offers attractive yield and duration characteristics to mitigate the risk of rising interest rates. 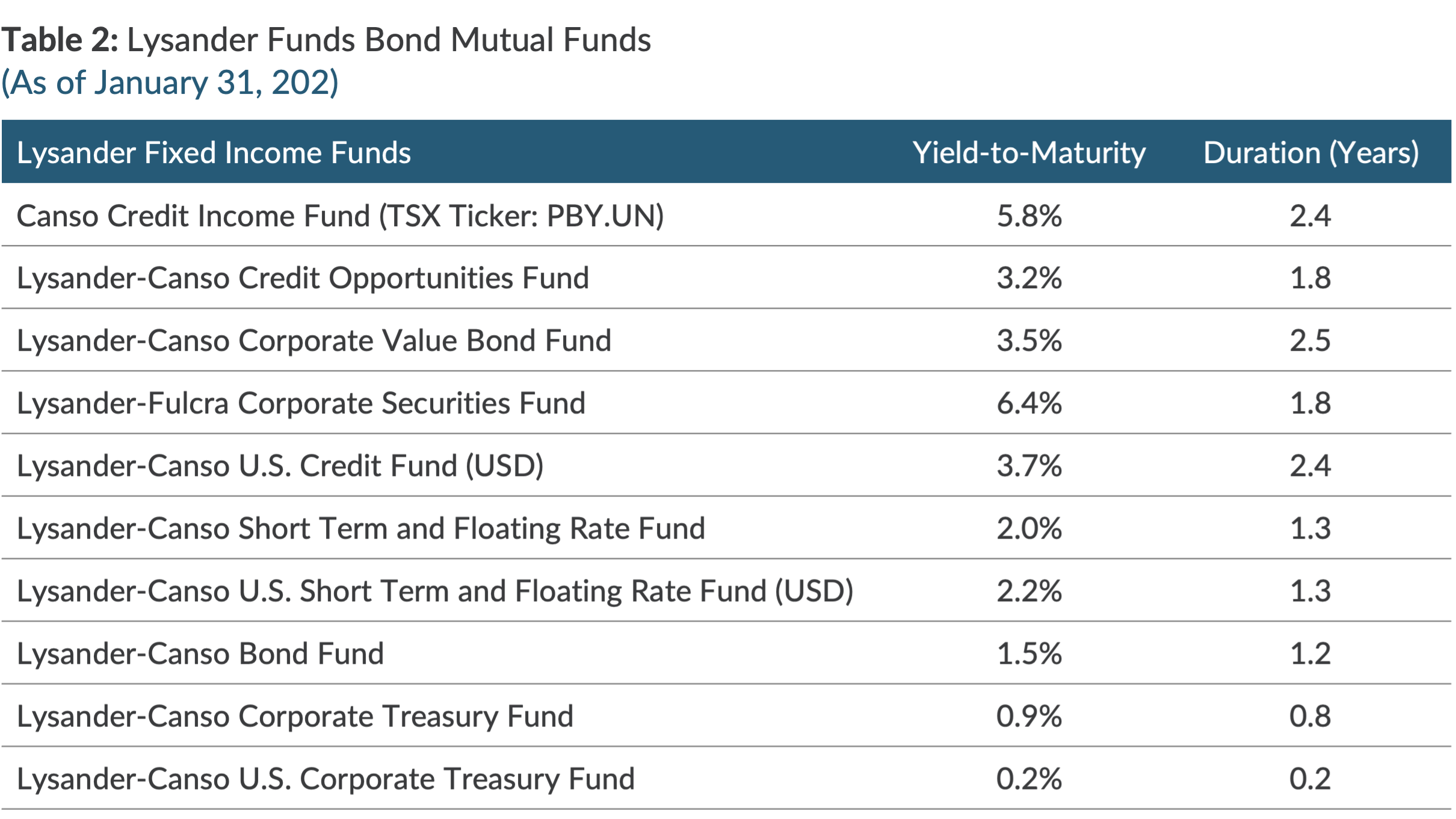 1 https://www.bankofcanada.ca/about/
2 Duration is quoted in units of “years”. The duration figure represents the approximate percentage price change up or down for a 1% change in interest rates – i.e. a duration of 8 years can be interpreted as if interest rates increase by 1%, the price of the bond will fall by approximately 8%, and vice versa if interest rates fall.
3 The ICE BofAML Canada Broad Market Index is comprised of government and corporate bonds with investment grade credit ratings issued in Canadian dollars.

This document has been prepared by Lysander Funds Limited and has been prepared solely for information purposes. Information in this document is not intended to constitute legal, tax, securities or investment advice and is made available on an "as is" basis. Lysander Funds Limited does not make any warranty or representation regarding the information herein. Information in this document is subject to change without notice. Lysander Funds Limited does not assume any duty to update any information herein.
This document is not an invitation to invest in the Funds and does not constitute a public offering of sale.
Purchases in the Funds can only be made through an Investment Professional on the terms in the applicable fund’s offering document by eligible investors. Each purchaser of units in a fund may have statutory or contractual right of action.
Nothing in this document should be considered a recommendation to buy, sell or short a particular security.
You will usually pay brokerage fees to your dealer if you purchase or sell units of Canso Credit Income Fund on the Toronto Stock Exchange. If the units are purchased or sold on the Toronto Stock Exchange, investors may pay more than the current net asset value when buying units of Canso Credit Income Fund and may receive less than the current net asset value when selling them. There are ongoing fees and expenses associated with owning units of an investment fund. An investment fund must prepare disclosure documents that contain key information about the fund. You can find more detailed information about [the Fund] in these documents.
Commissions, trailing commissions, management fees and expenses all may be associated with mutual fund investments. Please read the prospectus before investing. Investment funds are not guaranteed, their values change frequently and past performance may not be repeated.
This document may contain forward-looking statements. Statements concerning a fund’s or entity’s objectives, goals, strategies, intentions, plans, beliefs, expectations and estimates, and the business, operations, financial performance and condition are forward looking statements. The words “believe”, “expect”, “anticipate”, “estimate”, “intend”, “aims”, “may”, “will”, “would” and similar expressions and the negative of such expressions are intended to identify forward-looking statements, although not all forward-looking statements contain these identifying words. These forward- looking statements are subject to various risks and uncertainties that could cause actual results to differ materially from current expectations. Readers are cautioned not to place undue reliance on these forward-looking statements. While Lysander considers these risks and uncertainties to be reasonable based on information currently available, they may prove to be incorrect.

Any unauthorized use or disclosure is prohibited. Nothing herein should in any way be deemed to alter the legal rights and obligations contained in agreements between any ICE Data Services entity ("ICE") and their clients relating to any of the Indices or products or services described herein. The information provided by ICE and contained herein is subject to change without notice and does not constitute any form of representation or undertaking. ICE and its affiliates make no warranties whatsoever either express or implied as to merchantability fitness for a particular purpose or any other matter in connection with the information provided. Without limiting the foregoing ICE and its affiliates makes no representation or warranty that any information provided hereunder are complete or free from errors omissions or defects. All information provided by ICE is owned by or licensed to ICE. ICE retains exclusive ownership of the ICE Indices including the ICE BofAML Indexes and the analytics used to create this analysis ICE may in its absolute discretion and without prior notice revise or terminate the ICE information Indices and analytics at any time. The information in this analysis is for internal use only and redistribution of this information to third parties is expressly prohibited.
Neither the analysis nor the information contained therein constitutes investment advice or an offer or an invitation to make an offer to buy or sell any securities or any options, futures or other derivatives related to such securities. The information and calculations contained in this analysis have been obtained from a variety of sources including those other than ICE and ICE does not guarantee their accuracy. Prior to relying on any ICE information and/or the execution of a security trade based upon such ICE information you are advised to consult with your broker or other financial representative to verify pricing information. There is no assurance that hypothetical results will be equal to actual performance under any market conditions. THE ICE INFORMATION IS PROVIDED TO THE USERS "AS IS." NEITHER ICE NOR ITS AFFILIATES NOR ANY THIRD PARTY DATA PROVIDER WILL BE LIABLE TO ANY USER OR ANYONE ELSE FOR ANY INTERRUPTION INACCURACY ERROR OR OMISSION REGARDLESS OF CAUSE IN THE ICE INFORMATION OR FOR ANY DAMAGES RESULTING THEREFROM. In no event shall ICE or any of its affiliates employees officers directors or agents of any such persons have any liability to any person or entity relating to or arising out of this information analysis or the indices contained herein.
®Lysander Funds is a registered trademark of Lysander Funds Limited.