The dot plot was created to give Fed followers an advanced look at what Fed officials were thinking before they made any official interest rate decisions. In the decades prior to the financial recession, there was never any formal interest rate guidance given by the Fed. Market participants were left to their own devices to predict the path of interest rates. A foreign concept for any young analyst / portfolio manager that has entered the market in the last 10 years.

However, with an abrupt change in the inflation picture over the last year and a blood bath in traditional fixed income indices in the first quarter of this year, markets are grasping for guidance. Unfortunately, they will not find it in the Fed’s dot plot.

With what appears to be the great “pivot” to a higher rate environment, the market can no longer take comfort from Papa Powell. Even last summer the Fed chairman stated that “Dots are to be taken with a big, big grain of salt…The dots are not a great forecaster of future rate moves.”

As highlighted in our previous commentary, the combination of ultra-low rates, work from home rules, and fiscal support for consumers created fantastical valuations in the affectionately labeled “meme” stocks. While these companies represent a small part of the equity market, recent earnings reports from large S&P 500 companies have emphasized the pressure of supply chain problems as well as higher material and labor costs. Equity investors have taken notice of these margin dampers with the S&P 500 index down over 13 percent to the end of April this year.

Crucially, the Fed Funds rate is still only at 0.75 – 1.00 %. Expectations are for it to reach 2.5% – 2.75% by year end and as high as 4.00% to 4.25% by the summer of 2023. Avoiding the constraints of benchmark investing will be critical to avoid, in our opinion, the lurches that the market may face the next couple of years. Lower prices are already starting to get our attention but selling has been reasonably orderly and the prospect of higher future returns, in our opinion, has not reached its nigh.

The portfolio of Lysander-Fulcra Corporate Securities Fund (the “Fund”) has maintained a very short level of duration of approximately 2 years for some time, and a robust level of liquidity (cash and short corporates / governments) that has helped the Fund avoid the pitfalls faced by the indices and fully invested benchmark constrained managers. While several bonds have contributed to the Fund’s slight positive performance year to date, the position in Sherrit International bonds has been most impactful.

As one on the largest producers in the world of class one nickel, Sherritt stands to financially benefit from the recent rise in the price of nickel (graph below) due to economic sanctions being placed on Russia, historically one of the largest exporters of nickel. While this dramatic price increase in a commodity can have an immediate positive impact on the public equity of a concentrated producer it may not impact the bond price of said producer. 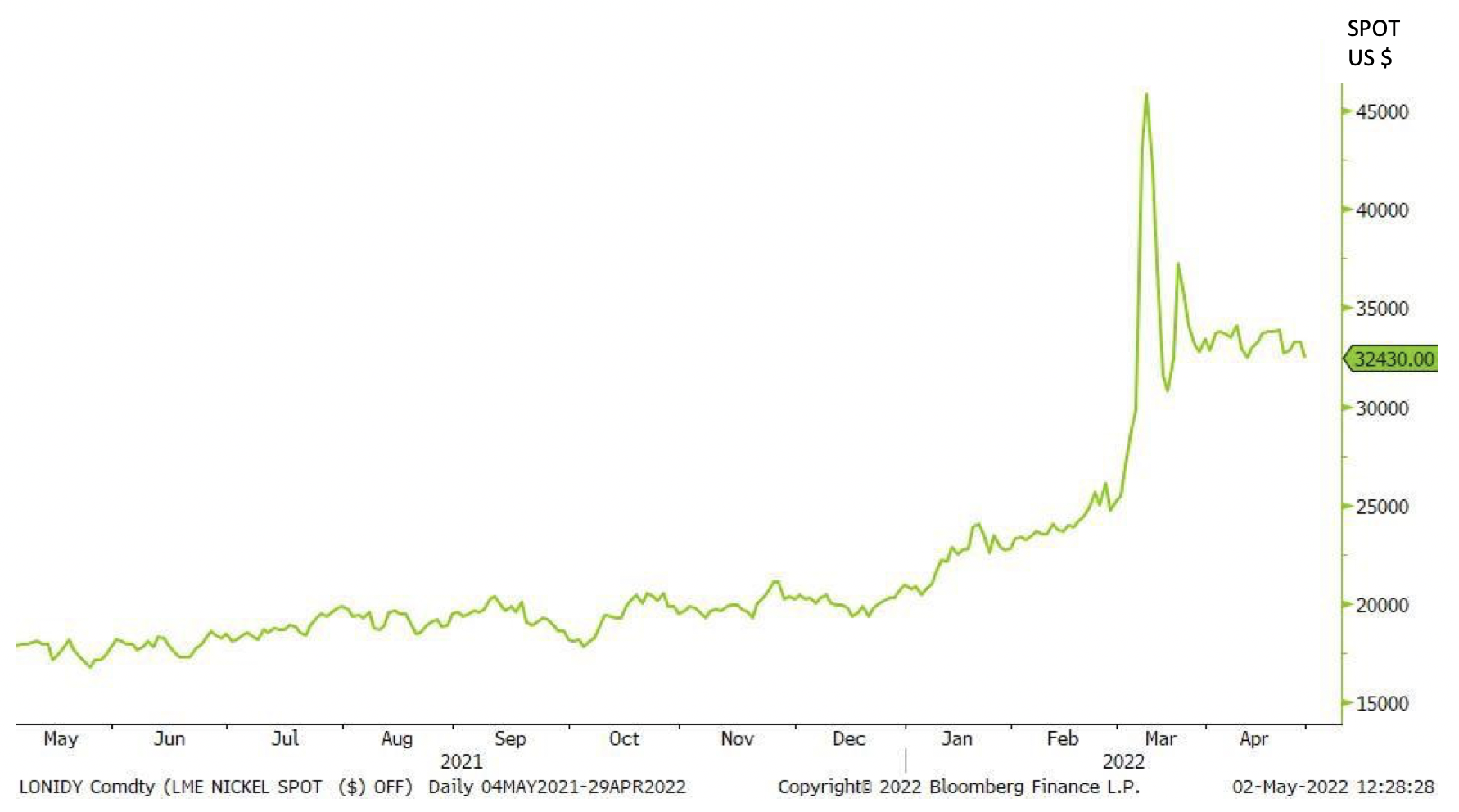 In the case of Sherritt, however, the bonds contain a unique covenant that requires the company to buy back bonds at par with any excess free cash flow the company generates after maintenance capital expenditures. This is an obligation, not an option for the company and is a very creditor friendly covenant that has created interest in the Sherritt bonds.

As the path to higher interest rates is set, it will not necessarily be a straight one. At a current 0.75 – 1.00 % Fed Funds rate which is forecasted by some to be above 4% in 12-16 months, the bumpy ride for “traditional” fixed income is sure to continue. While the positive repricing continues, we expect a very target rich environment to build.

This document has been prepared jointly by Lysander Funds Limited (“Lysander”) and Fulcra Asset Management Inc. (“Fulcra”) solely for information purposes. Information in this document is not intended to constitute legal, tax, securities or investment advice and is made available on an "as is" basis. Neither Lysander nor Fulcra make any warranties or representations regarding the information herein. Information in this document is subject to change without notice. Neither Lysander nor Fulcra assume any duty to update any information herein. Certain information in this document has been derived or obtained from sources believed to be trustworthy and/or reliable. Neither Lysander nor Fulcra assume responsibility for the accuracy, currency, reliability or correctness of any such information. Nothing in this document should be considered a recommendation to buy, sell or short a particular security.
In this document, “we”, “us”, and “our” means Fulcra.
Lysander is the investment fund manager of Lysander-Fulcra Corporate Securities Fund (the “Fund”). Fulcra is the portfolio manager of the Fund.
Commissions, trailing commissions, management fees and expenses all may be associated with mutual fund investments. Please read the prospectus before investing. Investment funds are not guaranteed, their values change frequently, and past performance may not be repeated.
This document may contain forward-looking statements. Statements concerning a Fund’s or entity’s objectives, goals, strategies, intentions, plans, beliefs, expectations and estimates, and the business, operations, financial performance and condition are forward looking statements. The words “believe”, “expect”, “anticipate”, “estimate”, “intend”, “aims”, “may”, “will”, “would” and similar expressions and the negative of such expressions are intended to identify forward-looking statements, although not all forward-looking statements contain these identifying words. These forward- looking statements are subject to various risks and uncertainties that could cause actual results to differ materially from current expectations. Readers are cautioned not to place undue reliance on these forward-looking statements. While Lysander and Fulcra consider these risks and uncertainties to be reasonable based on information currently available, they may prove to be incorrect.
Nothing in this document should be considered a recommendation to buy, sell or short a particular security. Any specific securities discussed are intended as an illustration of the portfolio manager’s security selection process. The Fund may sell these securities at any time, or purchase securities that have previously been sold. The securities or short positions may increase or decrease in value after the date hereof, and the Fund may accordingly gain or lose money on the investment in the securities. The statements by the portfolio manager in their commentaries are intended to illustrate their approach in managing the Fund, and should not be relied upon for any other purpose.
The source of all ICE BofAML Indices is ICE BofAML Indexes. Any unauthorized use or disclosure is prohibited. Nothing herein should in any way be deemed to alter the legal rights and obligations contained in agreements between any ICE Data Services entity ("ICE") and their clients relating to any of the Indices or products or services described herein. The information provided by ICE and contained herein is subject to change without notice and does not constitute any form of representation or undertaking. ICE and its affiliates make no warranties whatsoever either express or implied as to merchantability fitness for a particular purpose or any other matter in connection with the information provided. Without limiting the foregoing ICE and its affiliates makes no representation or warranty that any information provided hereunder are complete or free from errors omissions or defects. All information provided by ICE is owned by or licensed to ICE. ICE retains exclusive ownership of the ICE Indices including the ICE BofAML Indexes and the analytics used to create this analysis ICE may in its absolute discretion and without prior notice revise or terminate the ICE information Indices and analytics at any time. The information in this analysis is for internal use only and redistribution of this information to third parties is expressly prohibited.
Neither the analysis nor the information contained therein constitutes investment advice or an offer or an invitation to make an offer to buy or sell any securities or any options, futures or other derivatives related to such securities. The information and calculations contained in this analysis have been obtained from a variety of sources including those other than ICE and ICE does not guarantee their accuracy. Prior to relying on any ICE information and/or the execution of a security trade based upon such ICE information you are advised to consult with your broker or other financial representative to verify pricing information. There is no assurance that hypothetical results will be equal to actual performance under any market conditions. THE ICE INFORMATION IS PROVIDED TO THE USERS "AS IS.“ NEITHER ICE NOR ITS AFFILIATES NOR ANY THIRD PARTY DATA PROVIDER WILL BE LIABLE TO ANY USER OR ANYONE ELSE FOR ANY INTERRUPTION INACCURACY ERROR OR OMISSION REGARDLESS OF CAUSE IN THE ICE INFORMATION OR FOR ANY DAMAGES RESULTING THEREFROM. In no event shall ICE or any of its affiliates employees officers directors or agents of any such persons have any liability to any person or entity relating to or arising out of this information analysis or the indices contained herein.