For a parent, it may seem like the right thing to do. For a child, nepotism can create a false sense of economic self-worth that might lead to a misguided sense of self and other confidence issues down the line.

To be sure, each relationship is unique, and all cases of nepotism are not necessarily a slippery path to career or other life challenges. However, it does, arguably, increase the chances of a bumpy career journey that may spill into other problems over time.

For investors, a nepotistic central government using fiscal and monetary largesse as bait can encourage a sense of contentment, laziness, and at worst an inflated view of one’s ability. Enter the meme stock and “traditional” fixed income investor.

To be clear, the continuation, and improved execution, of some fiscal government actions are necessary to bridge parts of society with the uncertain new normalcy that awaits us all. However, the financial repression that central banks are creating by keeping interest rates low will continue to make “traditional” (benchmark constrained) fixed income investors sitting ducks and allow pockets of frothiness to percolate (meme stocks etc…). 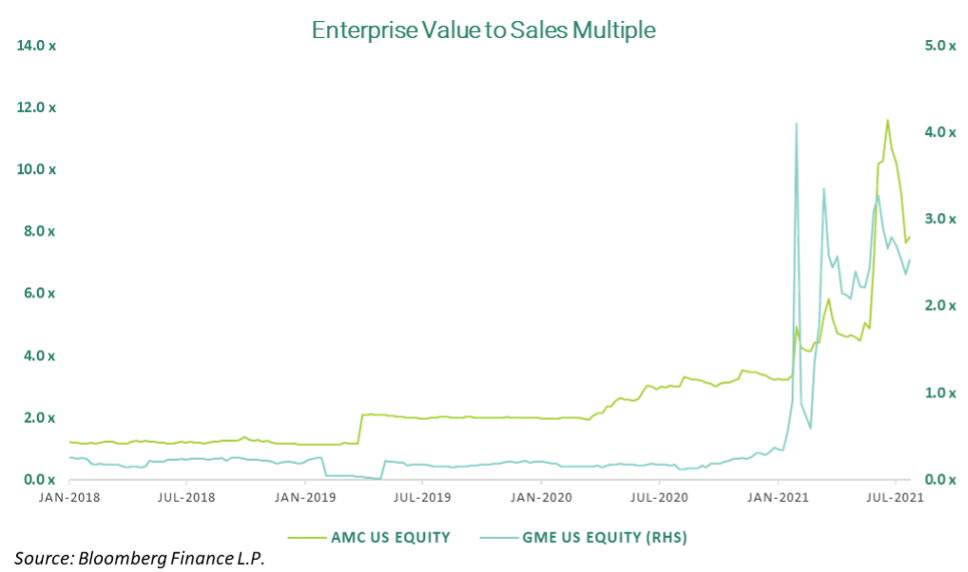 No love from this Parent

Year to date, most positions have contributed positively to the performance of Lysander-Fulcra Corporate Securities Fund (the “Fund”). One of the few exceptions has been the Fund’s investment in Diamond Sports Group’s (“DSPORT”) 5.375% Senior Secured Notes due 2026 and 6.625% Senior Notes due 2027. Despite initiating purchases in the $70s and $50s respectively, the DSPORT bonds have continued to drift lower. 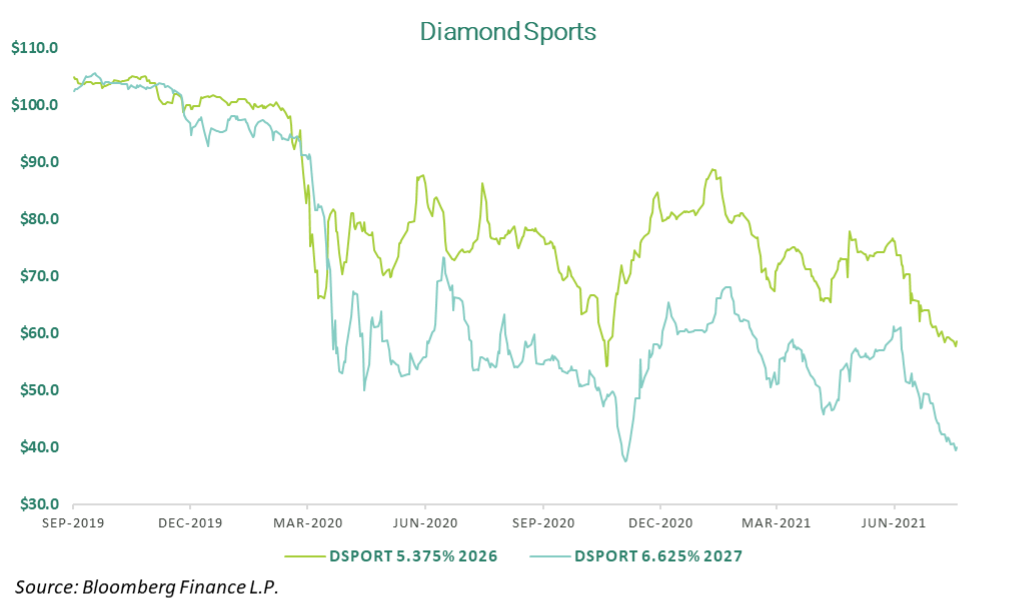 As a ring-fenced subsidiary of Sinclair Broadcasting (NASDQ: SBGI), DSPORT was created in 2019 to acquire the 21 FOX regional sports network (RSN) brands from Disney. For background, a RSN is a cable television channel that presents sporting events to a specific (regional) geographic area. As the largest owner of RSN’s in the United States, DSPORT represents 45 professional teams across baseball, basketball, and hockey.

A major part of the investment thesis is that sports fans’ passion for their home teams should continue to remain strong. However, the pandemic, continued cord cutting of cable / satellite service, and the ability for SBGI to layer more debt above existing bond issues has created a lot of uncertainty over the true economic value of DSPORT’s RSN’s.

Far from providing the calming support of a parent, SBGI has instead used current bond prices to threaten coercive bond exchanges where bondholders swap their existing debt (5.375% and/or 6.625% bonds), at current prices, into more senior debt. If successful, this has the effect of reducing the debt load of DSPORT as investors would be exchanging $60 worth of bonds (approx. current price of 5.375% bonds) for every $100 originally issued to receive $60 in bonds that are more secure. For the investor, this has crystalized a $40 loss, assuming they purchased the bond at $100. SBGI and DSPORT would benefit by reducing debt by 40% from those bond investors that took up the exchange.

While there are many components to the DSPORT story, the most negative influence fundamentally is the continued cord cutting by consumers and the reduced willingness of cable and satellite broadcasters to pay the high fees that RSN owners like SBGI are asking.

While cord cutting isn’t new, it has highlighted the importance of moving to a direct-to-consumer (DTC) model. In December 2020, SBGI announced a partnership with gaming company Bally Corporation with the intention to launch a Bally Sports DTC app in 2022. This will allow non-cable subscribers the ability to access or subscribe to certain content from the RSN’s directly. While the Bally Sports initiative is in its “early innings”, we believe it is an important strategy to pursue to offset the cord cutting trend and eventually profit from the change in consumers sports media expenditure habits.

The Canadian oil and gas sector has experienced an extended bear market since the middle of 2014 and, mostly, been an awful place for an equity investor. As a generalist contrarian credit investor, we are always interested in dissecting and studying any fundamental gaps, both positive and negative, equity markets maybe projecting on the bonds of the same companies. 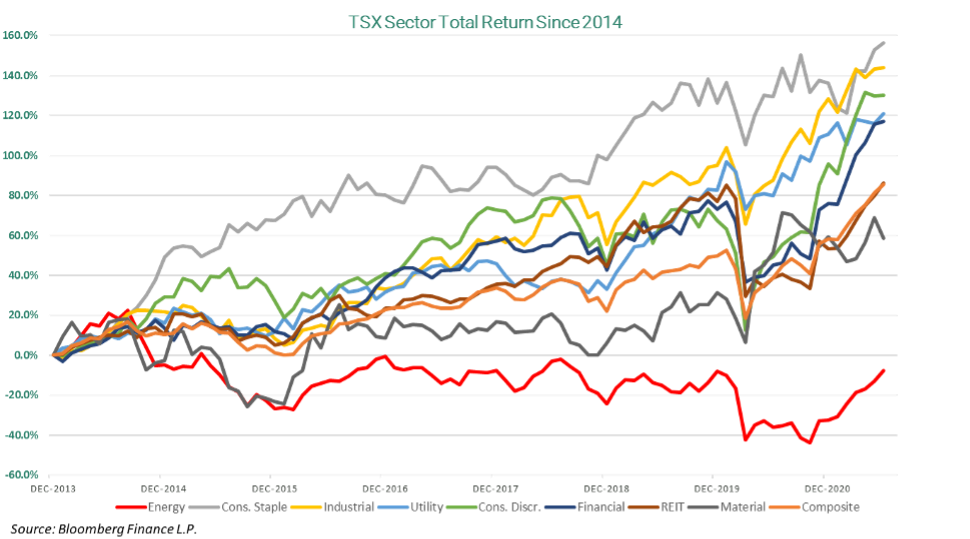 In the case of Canadian energy “names” the negative overhang is broad yet profoundly differentiated as some credits in the sector provide, in our opinion, attractive yields with very short duration.

Recently, NuVista, the bonds of which the Fund has owned for a few years, refinanced its C$ 220mln of 6.625% bonds due 2023 into 7.875% bonds due 2026. In the first 2 quarters of this year the NuVista 2023 bonds were up 39% (including interest)! We did “roll” a small amount of the 2023 bonds into the 2026 bonds. Despite the rate at which NuVista is currently de-levering, the company had to increase the coupon to entice investors to roll and attract new investors that had only one short year ago seen the 2023 bonds in the $60s.

Our preference is to buy hard asset / shorter duration or dramatically mispriced illiquid bonds in the oil and gas space from companies that are operated by defensive management teams. As oil and natural gas prices have been strong this year, cash has been accumulating significantly enough at some companies that their shorter duration bonds are becoming not refinanceable but, in our opinion, bankable.

To the Moon and Back

Lysander is the investment fund manager of Lysander-Fulcra Corporate Securities Fund (the “Fund”). Fulcra is the portfolio manager of the Fund.
Commissions, trailing commissions, management fees and expenses all may be associated with mutual fund investments. Please read the prospectus before investing. Investment funds are not guaranteed, their values change frequently, and past performance may not be repeated.

Nothing in this document should be considered a recommendation to buy, sell or short a particular security. Any specific securities discussed are intended as an illustration of the portfolio manager’s security selection process. The Fund may sell these securities at any time, or purchase securities that have previously been sold. The securities or short positions may increase or decrease in value after the date hereof, and the Fund may accordingly gain or lose money on the investment in the securities. The statements by the portfolio manager in their commentaries are intended to illustrate their approach in managing the Fund, and should not be relied upon for any other purpose.