Jeff Bezos declared the few short minutes aboard his New Shepard space capsule his “best day ever!” which is really saying something given he’s the world’s richest person and father of four children. Others recently enjoying good days included unseeded British teen Emma Raducanu who shocked the tennis world to win the U.S. Open over Canada’s own Leylah Fernandez, the United States golf team who destroyed Europe in the Ryder Cup, and American football, which returned to play in front of jam-packed stadiums. Daniel Craig enjoyed a much-delayed good day as his long-awaited last James Bond movie No Time to Die premiered to rave reviews on September 30th. 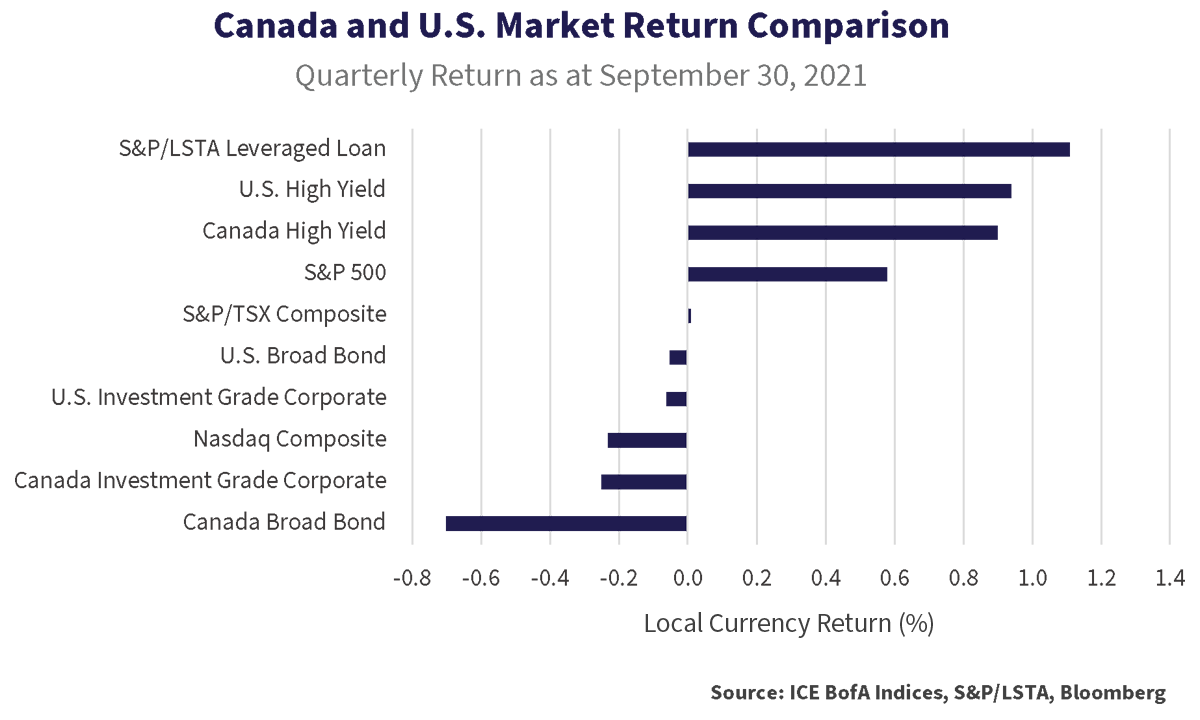 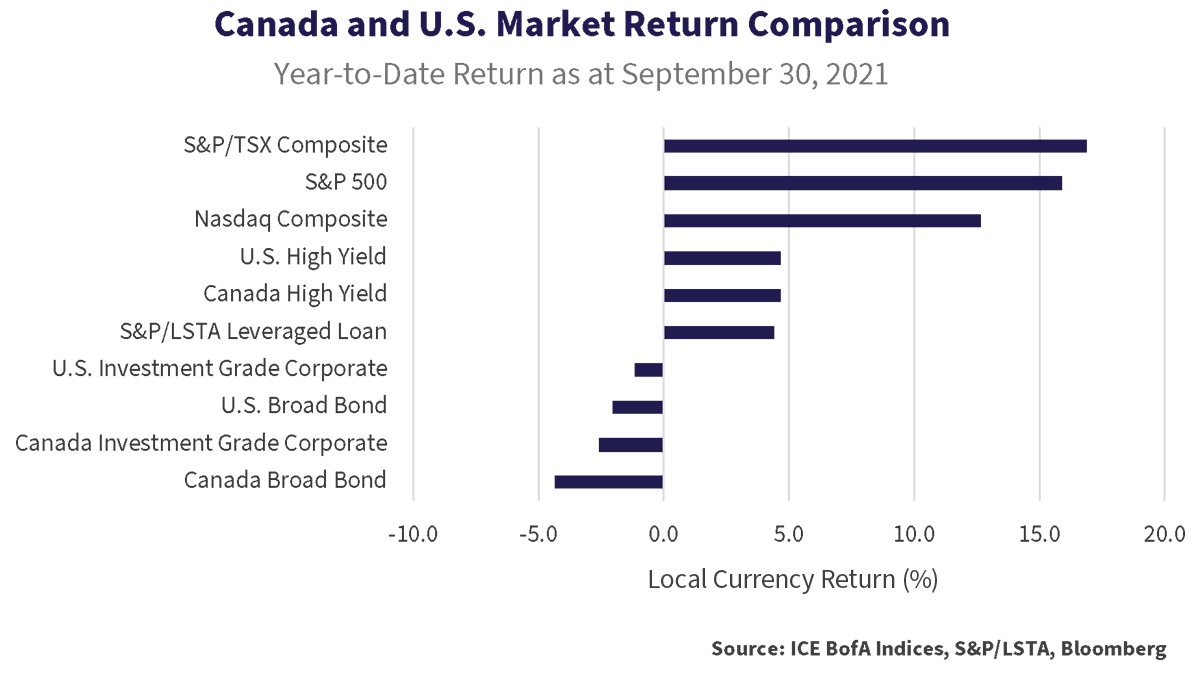 The graph below tracks the returns of the ICE BofA Corporate Index in Canada and the U.S. After sharp drawdowns in the first quarter, both markets trended higher with the U.S. market moving into positive territory for the first time in July. The stay didn’t last long, as rising government bond yields led to falling prices to end the quarter. 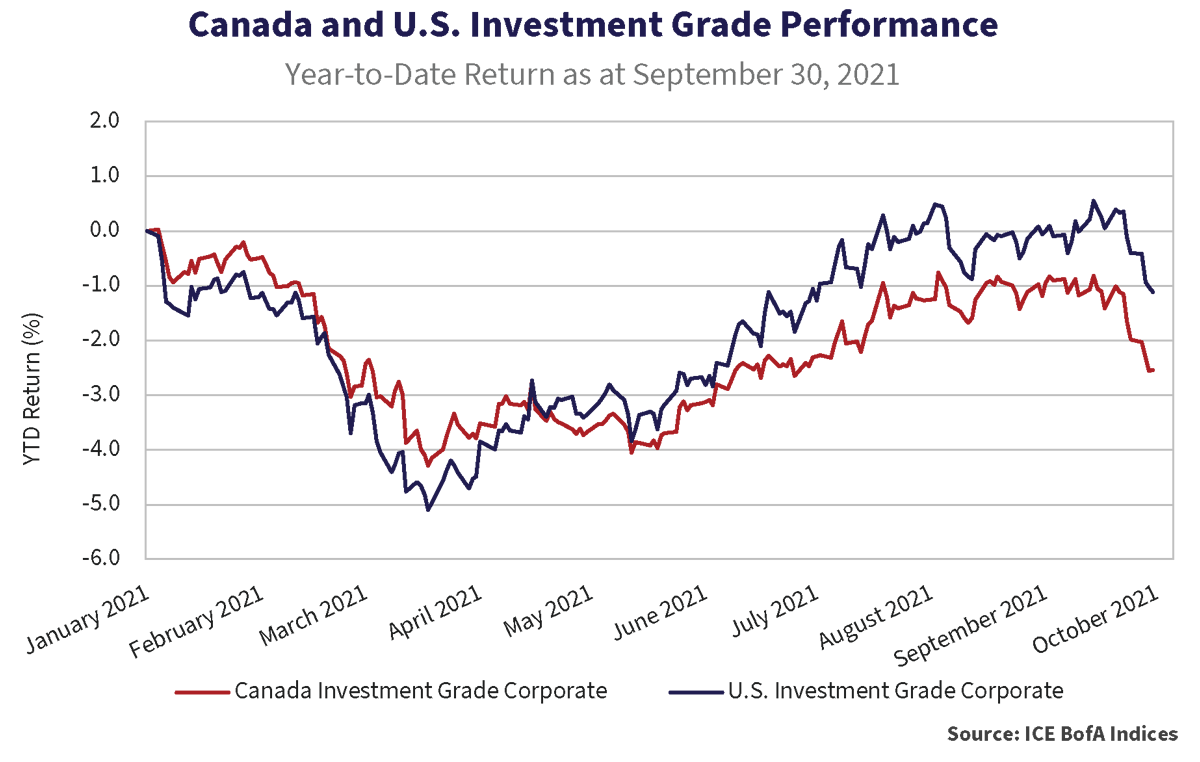 Volatility in government bond yields continued to drive returns in investment grade markets. Credit spreads in high quality bonds have been reasonably defensive through much of the market volatility in risk assets. Pressure on spreads from elevated levels of new issue activity throughout 2021 has been offset by maturities and refinancing activity, limiting net new supply into the markets.

It Didn’t Used to Be This Way 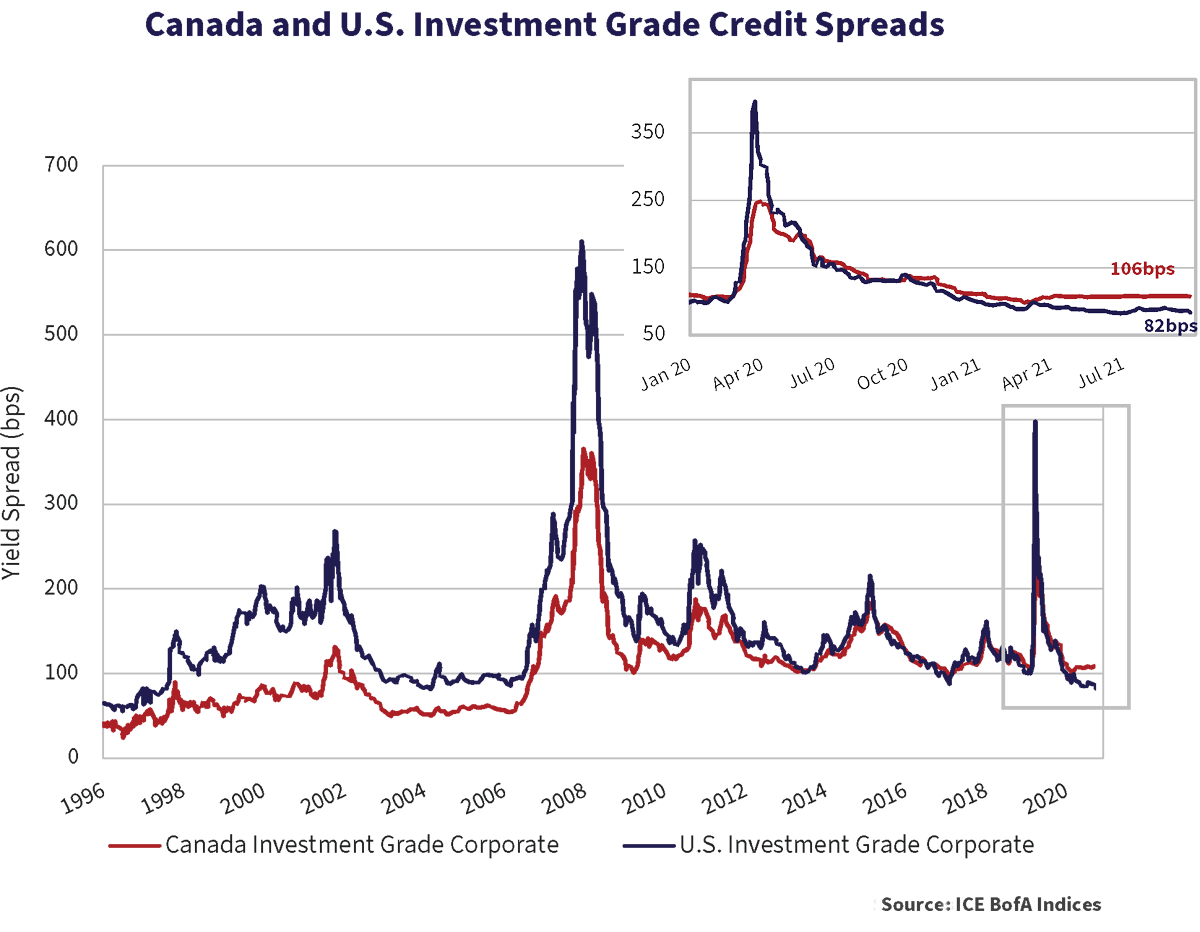 If government bond yields continue to push higher, we expect demand from yield buyers to push investment grade spreads tighter. However, with upside from spread narrowing limited, volatility in government bond yields will remain the key risk in high quality bond markets and will ultimately dictate if negative absolute returns persist through the end of 2021 and beyond.

Investment grade markets continue to experience growth in ESG related issuance. With a year- to-date tally over U.S.$700 billion, underwriters expect ESG debt sales from governments and corporations to surpass U.S.$1 trillion in 2021, more than double 2020 issuance. This push was further led by Walmart Inc. who issued their first green-bond in September. The U.S.$2 billion bond broke the record as the largest green-bond issued by a U.S. corporation. The AA-rated 10- year bond was issued at a 50bps spread above Treasuries and the company will be required to invest the proceeds in “Eligible Green Investments” over the coming years.

North of the border, Enbridge followed up their successful U.S. dollar sustainability-linked bond (SLB) issue in June by issuing their first SLB in Canada. Enbridge raised $1.1 billion from their 12-year offering priced slightly tighter than a normal Enbridge bond. This premium to a traditional Enbridge bond is known as a “greenium” and is indicative of the market’s preference for this type of issuance. Enbridge’s VP of Treasury labelled this deal “truly outstanding”. Desjardins Group issued its debut ESG bond in Canada as well, receiving a 4bp greenium for doing so. We continue to be surprised at investor’s willingness to pay up for these types of securities. After all, a company cannot behave one way for a certain class of security holder and another way for others. A company either has good character or not.

Is It Just Me or Does This Look Expensive?

The U.S. high yield market was able to overcome some moderate spread volatility during the quarter and maintain a positive return. While spreads finished the quarter modestly wider, the graph of U.S. high yield credit spreads below illustrates spreads that remain through pre-pandemic levels and are not far from all time tights. At a current spread level of 331bps, high yield markets continue to be expensive. 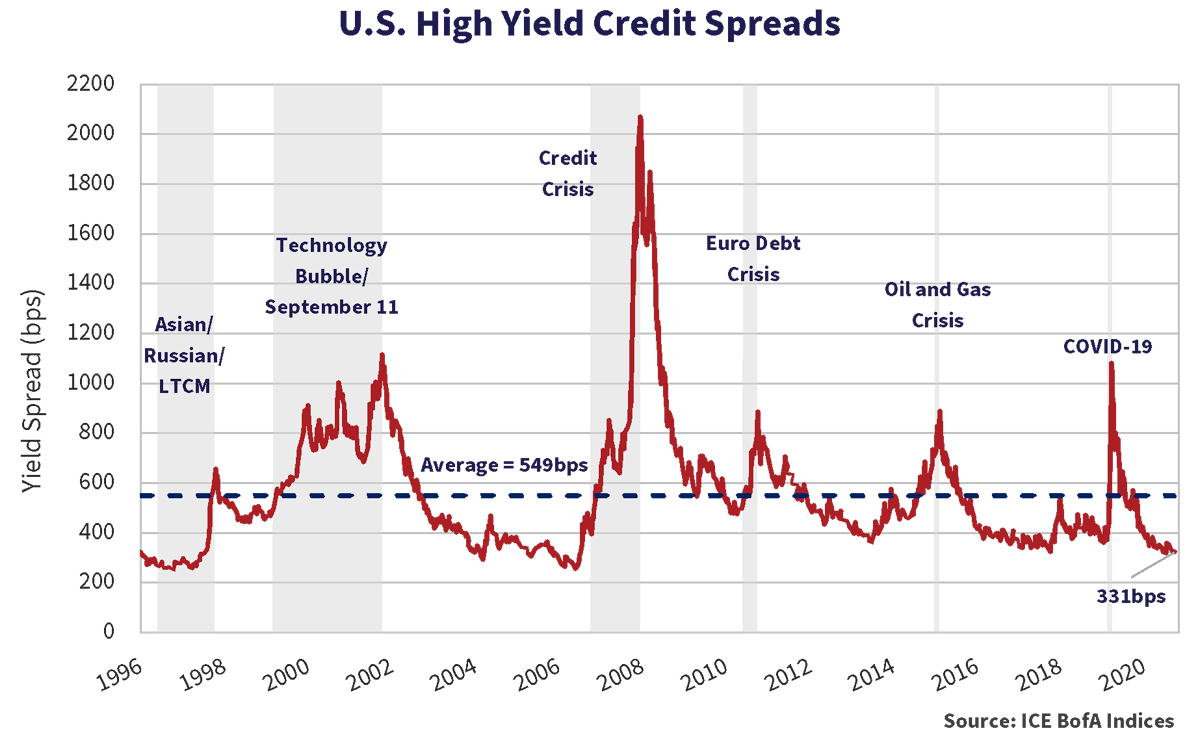 Taking the High Out of High Yield

The combination of tightening credit spreads and low government bond yields has pushed the all-in yield of the U.S. high yield market to all time low levels. The yield of the ICE BofA U.S. High Yield Index finished the most recent quarter at 4.1% with a striking 56.6% of constituents having a yield below 4%. 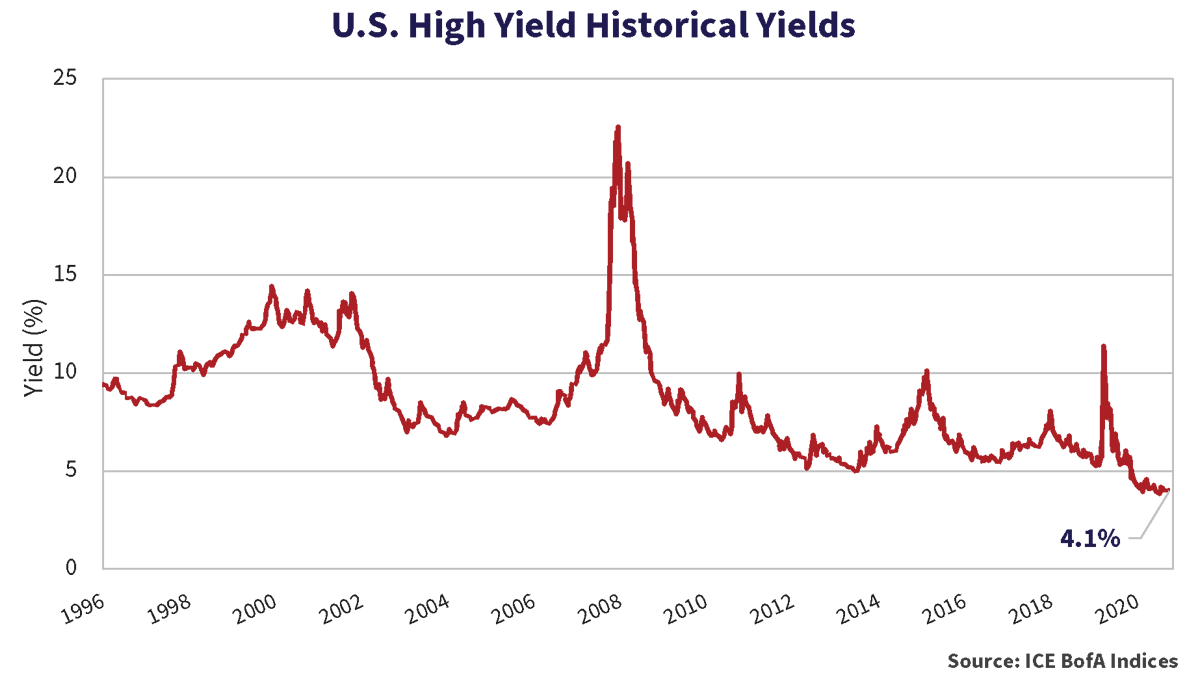 Given the historically low yield environment, it is no surprise that companies continue to issue new debt into the markets to yield starved investors. J.P. Morgan has calculated year to date new issuance totals in the U.S. high yield market at U.S.$409.7 billion, which is up 17% since last year, and well on its way to surpassing the record annual issuance of U.S.$450 billion from last year.

Issuers in pandemic related industries completed some notable refinancing transactions in the quarter. Royal Caribbean Cruises Ltd. issued bonds with a 5.5% coupon to partially refinance its 11.5% senior secured notes. Carnival Corp. & PLC sold a new issue with a 4% coupon to redeem its 11.5% coupon issue. Air Canada completed refinancing transactions in excess of $7.1 billion including $2 billion in first lien secured notes, the largest Canadian dollar high yield issue to date. The new Air Canada issue came with a coupon of 4.625% and is non-callable for 4.5 years.

The selloff in government bond yields and the seemingly never-ending reach for yield also continues to drive appetite for floating rate leveraged loans. J.P. Morgan’s tally of gross leverage loan issuance is up 110% year over year to U.S.$655.5 billion including U.S.$179.8 billion of repricings and U.S.$355.7 billion of paydowns. The net increase in supply was largely absorbed by strong CLO creation of U.S.$122.3 billion. The market continued to reward issuers with better pricing and more flexible covenant packages as over 90% of leveraged loan issuance in 2021 has been covenant-lite format.

LIBOR’s use as a reference rate for floating rate transactions is coming to an end. Beginning next year, issuers will need to select alternative reference rates as LIBOR drifts into the sunset. Anticipating the change, there was a rush in Q3 to price LIBOR-based deals before the window closes.

Evergrande, one of China’s largest real estate development companies with 798 projects in 234 cities across China, missed a coupon payment on a U.S. dollar bond. The company’s high leverage, exposure to Chinese property markets, coupled with expensive forays into electric vehicles, health care, soccer teams and theme parks, are the focus of investor concerns over the company’s viability and potential knock-on effects in China and beyond. Concerns roiled Asian financial markets and gave pause to North American ones. Evergrande’s U.S. dollar bonds are quoted at ~20 cents on the dollar.

The situation appears to be largely a made in China problem and therefore one likely to be resolved by Chinese authorities. Nevertheless, Evergrande raises concerns over excessive leverage throughout the Chinese financial system and potential knock-on effects on global supply chains and markets.

Don’t Bring Me Down

Nothing vexes fixed income investors more than negative returns, even for short periods. In the current environment we remain cautious about duration and are patiently moving portfolios to higher quality credit. We are selectively participating in refinancing opportunities, notably for issuers hardest hit by the pandemic, where a combination of risk premium and capital structure priority provide adequate compensation.

Certain information in this publication has been derived or obtained from sources believed to be trustworthy and/or reliable. Canso Investment Counsel Ltd. does not assume responsibility for the accuracy, currency, reliability or correctness of any such information.

Source: Bloomberg Index Services Limited. BLOOMBERG® is a trademark and service mark of Bloomberg Finance L.P. and its affiliates (collectively "Bloomberg"). BARCLAYS® is a trademark and service mark of Barclays Bank Plc (collectively with its affiliates, "Barclays"), used under license. Bloomberg or Bloomberg's licensors, including Barclays, own all proprietary rights in the Bloomberg Barclays Indices. Neither Bloomberg nor Barclays approves or endorses this material, or guarantees the accuracy or completeness of any information herein, or makes any warranty, express or implied, as to the results to be obtained therefrom and, to the maximum extent allowed by law, neither shall have any liability or responsibility for injury or damages arising in connection therewith.

Any unauthorized use or disclosure is prohibited. Nothing herein should in any way be deemed to alter the legal rights and obligations contained in agreements between any ICE Data Services entity ("ICE") and their clients relating to any of the Indices or products or services described herein. The information provided by ICE and contained herein is subject to change without notice and does not constitute any form of representation or undertaking. ICE and its affiliates make no warranties whatsoever either express or implied as to merchantability fitness for a particular purpose or any other matter in connection with the information provided. Without limiting the foregoing ICE and its affiliates makes no representation or warranty that any information provided hereunder are complete or free from errors omissions or defects. All information provided by ICE is owned by or licensed to ICE. ICE retains exclusive ownership of the ICE Indices including the ICE BofAML Indexes and the analytics used to create this analysis ICE may in its absolute discretion and without prior notice revise or terminate the ICE information Indices and analytics at any time. The information in this analysis is for internal use only and redistribution of this information to third parties is expressly prohibited.

Neither the analysis nor the information contained therein constitutes investment advice or an offer or an invitation to make an offer to buy or sell any securities or any options futures or other derivatives related to such securities. The information and calculations contained in this analysis have been obtained from a variety of sources including those other than ICE and ICE does not guarantee their accuracy. Prior to relying on any ICE information and/or the execution of a security trade based upon such ICE information you are advised to consult with your broker or other financial representative to verify pricing information. There is no assurance that hypothetical results will be equal to actual performance under any market conditions. THE ICE INFORMATION IS PROVIDED TO THE USERS "AS IS." NEITHER ICE NOR ITS AFFILIATES NOR ANY THIRD PARTY DATA PROVIDER WILL BE LIABLE TO ANY USER OR ANYONE ELSE FOR ANY INTERRUPTION INACCURACY ERROR OR OMISSION REGARDLESS OF CAUSE IN THE ICE INFORMATION OR FOR ANY DAMAGES RESULTING THEREFROM. In no event shall ICE or any of its affiliates employees officers directors or agents of any such persons have any liability to any person or entity relating to or arising out of this information analysis or the indices contained herein.

Commissions, trailing commissions, management fees and expenses all may be associated with mutual fund investments. Please read the offering document before investing. Mutual funds are not guaranteed, their values change frequently and past performance may not be repeated.